Here's a set of things that I've found out about CK2 that I don't think were covered well enough elsewhere. It's mostly nitshit, but I thought it'd be worth writing down.

I bought the big DLC pack on Steam and it came with the Ruler Designer which allows you to alter your starting leader. It sounds great on one hand - you get to change you appearance, your coat of arms, and (most importantly) your various traits, but it does have a harsh downside.

Again, you get to customize your initial leader so you can have traits that favor your situation. Be a genius, or a brilliant strategist. Be young, be old. Have a wife and kids when you enter the game. It does a decent job of forcing you to choose a combination of good and bad traits because they're all tied to your age. So, for example, you could be a genius level master strategist but you'll start the game in your late 40s. Add some gluttony and lust, maybe some physical disfigurement and you can still be a genius strategist in your 20s. Important traits can then be passed to children that you educate because you get expanded options when situations arise during their upbringing.

I can't stress this enough. When you're using the Ruler Designer you are not editing your leader, you are replacing him. In fact, the leader you replace even shows up in your court. This is an extremely important distinction. When you use the default leader, you start without taking penalties for short reigns, you probably have high relationships with your vassals, you don't start over your demesne size and you may even have powerful family in the area. For example, starting in Sweden with the Old Gods DLC, you have brothers and sisters all over with alliances. Or in Ireland 1066, starting in Dublin as the Earl, you are already the heir to Leinster and will inherit it shortly after your elderly father dies. Without that relationship you'll have to take it by force or intrigue.

Don't use the Ruler Designer if you're going to take over a large kingdom. Or, at least consider the relationships you already have in place and expect to spend awhile smoothing out relations with your vassals. Instead, take the leader that's in place and try to mold the heirs (if they're kids) into the sort of person you want to be next. This approach will take until your death, or even your first heir's death, but it'll be easier along the way.

I'd use the Ruler Designer if you are going to start as a vassal, or as the ruler of a very small area, like a count with no inheritance and no worthwhile allies.

Even if you're able to hand over all of your titles on death to a single heir (which can be rough to accomplish) do yourself a favor and make sure your heir is someone worth playing as.

I just recently had a play through where I was trying to reform the Norse Pagan religion. I had already united almost all of Sweden under my banner as King and I was working on getting a claim to the third Holy Site that I'd need to reform my religion. I had a truckload of piety and prestige when I died. Dying wasn't too big an ordeal ... at first. I lost a few titles to my half brother but I was expecting that (and had no choice, being unreformed pagan). What I wasn't expecting was that - oops - my heir was arbitrary, cruel, cynical, and gluttonous. His prestige was negative from day one. He was a brilliant strategist, but every single vassal hated him for his bad traits. This, in addition to the usual trouble with succession, was lethal to my plans and my game. The first year after this heir took over there were three dangerous factions, a civil war that cut my kingdom into tiny pieces and ... well, I didn't stick around too much after that. I wanted to assassinate myself.

So, it's not enough to be cognizant of having an heir, getting him married, and determining how titles are going to split on your death. You have to make sure that your heir isn't an asshole too. If I had been watching I could've plotted his destruction or just had him assassinated. If I had been paying closer attention when he was born, and raised him myself, I could've made sure he didn't grow up with these crappy traits in the first place.

One thing that wasn't clear to me when I started was that your Chancellor's "Fabricate Claims" is really a specialized tool rather than a central mechanic as the tutorial sort of implied.

There are a lot of CBs that are a lot more useful and give you a lot more scale and freedom to fight than Fabricate Claims. Fighting on grounds of religion, pushing de jure claims, inheriting or pushing claims on behalf of others you've brought into your court - these all give you a lot more leverage and are a lot less trouble to procure than waiting for your Chancellor. Especially if you're non-pagan and can't raid in the meantime.

You Don't Control all Holdings in your Counties

This is something that took me too long to understand. You already know that you're not in direct control over every county in your kingdom (unless it's a very small kingdom or you're a great steward). However, even in counties you do directly control, the holdings there are controlled by barons (landless property owners) who are vassals as well.

I knew all that, but what wasn't clear was that when you make improvements, say, to a city that's controlled by a baron level mayor that's still just improving his lot in life and not yours (directly).

Look at this window (screenshot from lparchive.org): 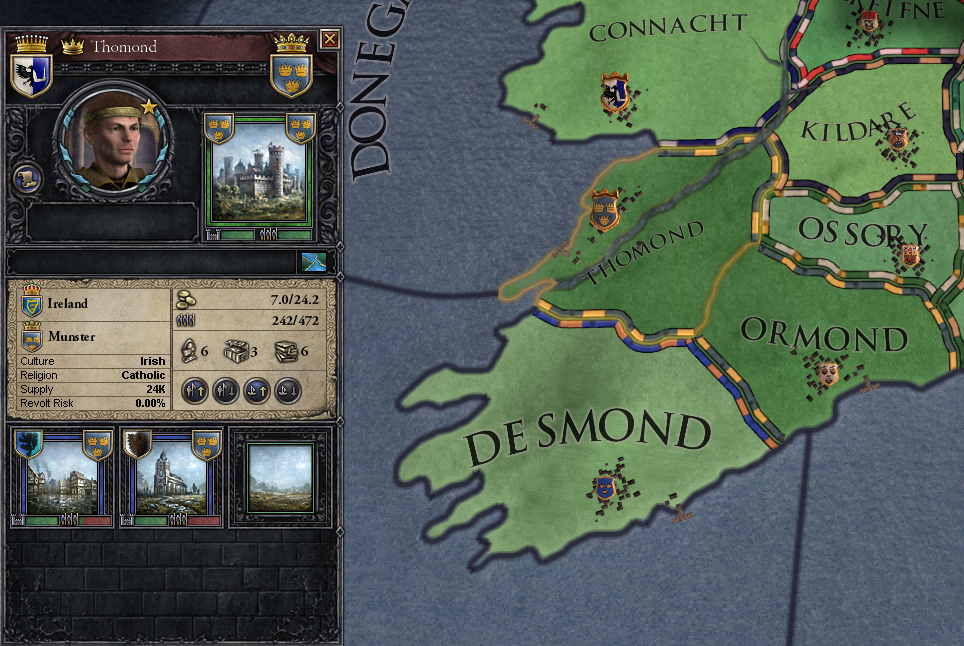 Thomond has a castle, the big picture to the right of the player's face. That's your holding in the area, that's where you click to make improvements. The city and bishopric are just like any other vassal holdings, even though they're on your land.

Money is extremely important in this game. Improvements are expensive, as are new holdings, and titles (which, as mentioned above are useful for persistent de jure claims). Mercenaries can get you out of a jam, but they're costly. Money is even useful as a political tool for manipulating the opinions of greedy vassals.

The thing that sets CK2 apart from other games though is that you have to think on an epic timescale for this stuff to pay off. The buildings themselves take years to construct and upgrade and each step of the way only adds a tiny fraction to the payoff. It's very similar to calculating the payoff for city improvements in Civ, you have to factor in how long you'll be able to reap these small benefits to determine if it's worth it.

In addition, you have to take quick advantage of any mechanics that work in your favor monetarily. Being a Norse pagan, for example, means that you can pillage coastal counties. Early on in the game you should basically be constantly raiding. In fact, as a Viking you get a penalty if you're at peace for too long which encourages you to raid just so you don't take the prestige hit. By raiding you can easily make enough money to create some big titles for those later de jure claims, or to build up some infrastructure that later you'll use to consolidate power. In the later game, however, you're much more likely to get tossed back into your longboats by a sizable force you don't want to face (after all, you're just raiding not conquering).