On 'The Left Hand of Darkness' 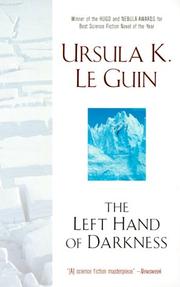 Ursula K. LeGuin has quickly become one of my favorite classic sci-fi authors. Wizard of Earthsea and The Dispossessed were both excellent and really showed LeGuin's great range of imagination.

The Left Hand of Darkness is yet another story that gives intense focus to the interesting part of the story and doesn't dawdle on minutiae. LeGuin spends a lot of time examining the interesting facets of the Gethenians, a human branch species living on Gethen (aka Winter for it's brutally cold).

To give an example, within a short reading section the main character, Genly Ai, a typical Terran human, goes from being a comfortable guest of Orgoreyn (an authoritarian communist state) to being arrested and shipped to prison. During this sequence virtually no prose is spent on Genly's capture, no description given of his arrest or any sort of resistance or chase, no reasoning is given (though the reader can infer easily enough). What LeGuin spends time on, however, is the harrowing, dehumanizing trip Genly spends locked in a truck on the way.

This is signature LeGuin. A different, although not necessarily lesser, author would get a lot of thriller mileage out of Genly's apprehension but instead LeGuin skips to the part that actually illuminates Gethenian culture - where Genly and his fellow prisoners are mistreated and left to silently bond together to avoid death.

As such, even being a scant 300-ish pages (similar to the other novels) it does so much to explore the Gethenian culture and the results of adapting to the harsh life on Winter. We get a sense of their values, their society, places where they are more generous and egalitarian than we are as well as places they are backwards from our viewpoint. The overall story of Genly Ai, similar to that of Shevek in The Dispossessed, isn't as important or as conclusive as one may expect, instead it's a vehicle to enhance our understanding.

One thing that seems mandatory to mention with this work is LeGuin's treatment of gender. The Gethenians have no set gender. They are hermaphroditic but asexual most of the time, and enter "kemmer" for a few days each month at which point their sex may become more definite for a period of time. Each person may become male or female at different points in their lives and each may bear or sire children in due course. It's a fascinating aspect of the Gethenians and LeGuin gives a lot of attention to it via Genly who instinctively struggles to put the people he meets into male/female boxes and who wonders if certain facets of Gethenian biology (or Karhidish culture) lead to things like lack of a concept of war. Or the poorly developed idea of nationalism/patriotism. Mostly though the Gethenian cultures portrayed just defy concepts of what is "gender normal" when a person is typically neither male or female and can potentially be either at any given cycle.

This is, no doubt, a great imaginary exercise and really colors a lot of the work of world building Gethenian cultures, along with the harsh cold of the planet, but it's also an image of what our society could look like if we could ever defeat prejudice. I'm not sure that's actually an attainable goal (our monkey brains being stubbornly tribal), but it's refreshing to see a society with such radical equality that race and gender (and thus orientation) are totally meaningless. It's a reminder that true equality isn't just allowing girls and boys to play with toys from both the pink or blue toybox... it's when all of the childrens' toys are in one toybox. In a truly just world, we're all they/them.

I'm not sure LeGuin would go that far (and in the foreword of my edition she makes is clear that this is a thought experiment rather than a prediction of any sort) but it's an achievement that she didn't just overlay the gender politics of 1969 onto an alien culture. Compare this with Dune, published a few years earlier and widely regarded as one of the most influential science fiction books ever, where it's the year 10,000 and women are still largely second class citizens even if they can wield superpowers.

To say LeGuin was ahead of her time is barely doing her justice, but as with her other works she proves to be quite imaginative and never wastes your time. I'm looking forward to reading more entries in the Hainish Cycle.