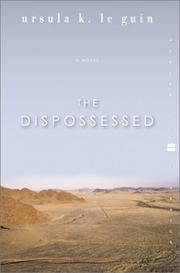 This book is profound in a way that all science fiction should aspire to be.

Previously, I read Le Guin's Wizard of Earthsea and I thoroughly enjoyed it, particularly being a very no-frills fantasy novel that didn't fall into the familiar pattern of being so epic and drawn out that it needed 1000 pages to deliver a bit of fun.

The Dispossessed feels similar. It wastes no time getting to the point. There is virtually no fat on the story and as such it hits hard and fast.

In the last couple of years I've started identifying as an anarchist and a communist. I'll write an entry on that one day (I've already drafted it multiple times) but in the meantime I've been searching for visions of what that world could look like. Kropotkin's Conquest of Bread was enticing, but it was also hung up in the 1890s and searching hard for contemporary examples. In The Dispossessed Le Guin uses science fiction's greatest asset, the imagination, and shows us a fully realized world that operates on the principles of human solidarity and mutual aid.

Like Wizard of Earthsea, the book is very personal and has a single main character, Shevek. We see the world through his lens and, to Le Guin's credit, neither the propertarian (capitalist) world of Urras or the Odonian (anarcho-communist) world of Anarres is a paradise. Each has their flaws, but the most damning criticisms are definitely laid at the feet of capitalism. My favorite quote:

"He tried to read an elementary economics text; it bored him past endurance, it was like listening to somebody interminably recounting a long and stupid dream. He could not force himself to understand how banks functioned and so forth, because all the operations of capitalism were as meaningless to him as the rites of a primitive religion, as barbaric, as elaborate, and as unnecessary. In a human sacrifice to deity there might be at least a mistaken and terrible beauty; in the rites of the money-changers, where greed, laziness, and envy were assumed to move all men's acts, even the terrible became banal."

Elsewhere, Le Guin gets to the crux of the individual hypocrisy of the Urrati in more specific terms. The facade of obscene luxury built on the hidden working class that Shevek is intentionally isolated from during his visit has many layers and analogs to the United States and other late stage capitalist societies.

Shevek's world, Anarres, is always described as a world of a more austere beauty, harsher. Survival is more difficult and the material conditions of the Annaresti are undoubtedly more spartan. I'm glad Le Guin took a critical look at the consequences of Annaresti society because they are the problems that must be hand-waved away in less hypothetic, more academic works like Kropotkin's. In a society without hierarchies there is still convention that develops, still expected behavior patterns, still societal pressure to conform and that is why even an anarchist world designed around freedom can calcify and harden into the familiar patterns of power. Shevek's antagonists on Anarres are people that have empowered themselves by monopolizing influence as consultants and judges that must exist to prioritize effort.

The primary example is Sabul, the consultant physicist that determines whether Shevek's work is worth sending to Urras. Sabul uses his position of privilege to elevate himself not in rank, but in practice. He has his own office to look over the papers, a brilliant reputation thanks to plagiarizing Urrasti physics, his name on Shevek's work as the price of recognition. This person must exist no matter how the economy is designed because only so many things will fit in a spaceship (or a truck, or a magazine, or a piece of software) and a subjective priority must be established. To count on all of these decision makers being perfectly ego-less and rational would be foolish.

This is why Le Guin, via Shevek, echoes Marx in the recognition that such a society must live in a permanent state of revolution. It is not enough to achieve the system, it must be maintained, the freedoms afforded to the individual must be exercised and that means perpetually breaking the relationships of power that congeal out of practical reality.

Overall the Anarresti live what seems to me to be an idyllic life and that same convention that is toxic when manipulated by the Sabuls of the world that have insinuated themselves into position of power, is the fiber of their society. The radical idea that everybody deserved to be fed and clothed and taken care of. That everyone deserves to have agency in their lives and they will naturally balance that impulse with the need to contribute directly to ensure those guarantees.

That, I think, is where Le Guin finds the crux of the issue and the starkest contrast between the capitalist Urrasti and anarchist Anarres societies. There is no true freedom when you are being coerced to survive. Referencing a previous moment when Shevek detects the uniform guilt and anxiety on the faces of the Urrasti workers he lets his opinions be known with a little help of unaccustomed alcohol:

"You are rich, you own. We are poor, we lack. You have, we do not have. Everything is beautiful here. Only not the faces. On Anarres nothing is beautiful, nothing but the faces. The other faces, the men and women. We have nothing but that, nothing but each other. Here you see the jewels, there you the eyes. And in the eyes you see the splendor, the splendor of the human spirit. Because our men and women are free - possessing nothing, they are free. And you the possessors are possessed. You are all in jail. Each alone, solitary, with a heap of what he owns. You live in prison, die in prison. It is all I can see in your eyes - the wall, the wall!"

As someone doomed to never retire and of a generation working hard to scrape by in a system growing ever more brutal, this resonated with me along with all of the gross hypocrisies Le Guin highlights in the fictional but all too real Urrasti society. There is a difference between the freedom of capitalism, the freedom to consume all you can afford, and the freedom of Anarres, the freedom to actually dictate the terms of your life without the hidden whip of destitution.

This is a great book and one that actually imagines this radical world without resorting to the science fiction trope of infinite post-scarcity. Le Guin totally nails every aspect of it from the criticism of capitalism, to the pitfalls of radical anarchy, to the biographical story of Shevek that brought me to tears more than a few times.