On The Conquest of Bread 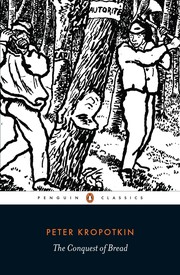 This is a well thought out and concisely written explanation of the basic tenets of anarchist communism.

I can't say that it converted me to Kropotkin's specific political ideology, but it did raise some very interesting points about how society is organized and envision some very creative, maybe even seductive, ideas about how we can change that organization for the better even if it's light on practical details about how to get from here to there.

Incredibly, for a book written in 1892, it actually holds up pretty well. From a historical point of view, Kropotkin was dealing with the foreshadows of basically every economic issue we face today. Industrialization was in full swing, globalization was in its infancy as colonialism and trade swept the world, even communication (with the advent of the telegraph and the trans-atlantic cable) is easily relatable to the modern day. Kropotkin is seeing the seeds of our current troubles everywhere. The only place the 130 year gap is really evident is when he gets into the statistics or makes pointed remarks at contemporary opponents (although the notes in this edition are very helpful).

I found the basic concept that drives him to communism very persuasive. The idea that work should be done to provide all people with the necessities (food, water, shelter, clothing) with the least amount of expended energy seems obvious but following that thought to a logical conclusion unravels the basic premise of capitalism.

The lowest rungs of our society, those producing the fundamental materials of life and industry with manual labor, cannot just produce enough for themselves and their countrymen because that's not how they assure their own livelihood. They need money for all of their other needs, which means they need excess to sell, which means they are competing against the very cheapest possible producer and, because every link in the chain needs to make money, the worker inherently creates more than he earns - the free market of capitalism working as planned.

But Kropotkin effectively argues that this is rife with problems. Not only is it obvious exploitation (the worker creates more value than he earns and the less he is paid the better), it relies on inequality. The farmer's wheat that ends up baked in bread and is sold to someone that can afford to purchase their food rather than cultivate it themselves. In the reverse, if the baker can buy wheat from someone for cheaper, they will. Without bothering here to factor in tax or rent that go directly to the state/owners, the bottom of society is sinking lower, the top of society is rising higher. Kropotkin saw this in post-feudal Europe thanks to the huge leaps brought by industrialization and the exploitation of cheap colonial labor. We see it today in our societies straining under wealth inequality thanks to automation and globalization taking the bottom out of the labor market.

While the criticism Kropotkin levels at capitalism is similar to Marx, and they broadly agree on the ownership of the means of production, his overall solution is much different. Marx argues that the solution to capitalism is state communism, where the state is given absolute authority to speak for "the people" to enforce equality from the top down, to ensure everyone gets their fair share. In a lot of ways that's a more practical approach because Marx allows for a lot of the machinery of capitalism to stay in place. The state can define prices and wages, levy taxes, hire people and so on. Marxism amounts to switching one state for another rather than a grand scale reordering of society and this is why, mostly after Kropotkin's time, Marxism had such a huge impact on the 20th century with revolutions across the globe.

Kropotkin explicitly rejects Marx, the state in its entirety (thus "anarchist" communism) and all of the machinery of capitalism, like money and wagedom which he calls "slavery in modern garb." He argues that both the state and capitalism inherently lead to inequality and the potential of abuse and corruption. It's hard to look at the intervening 130 years and disagree with his points. In the US we've seen our own government in decline, eroded by the corrosive influence of capitalism, deadlocked, made a mockery by corporations. The communist states aren't in much better shape, either disbanded or turned into one party autocracies that are unabashedly capitalist in everything but rhetoric. A lot of Kropotkin's critiques were damn near prescient.

The way Kropotkin envisioned society the state is replaced by many city sized communes that are basically autonomously feeding, clothing, and sheltering its citizens. A certain part of every person's day is spent serving the common good, and the rest can be spent as one pleases to enrich oneself. Developments that require inter-commune / national / global level coordination are accomplished through federation between the communes, and free agreement to proposals that are submitted there.

It's a very attractive society to think about. It's almost like Star Trek, except instead of replicators each person contributes work to the common good, and if you want something more than the basic necessities, you work directly toward that goal. If you want a telescope, you find who can make telescopes and you work with / for them in order to create a telescope. If you need any materials, you just go down the chain of production until you reach some core material you can help gather, or that society has deemed a necessity. It's almost like quest based communism. To get rewarded with that luxury item, or even create a new one, you basically craft it with the help of the artisans, or barter something you can do to earn the others' work. Unneeded work is never done. There are no imports or exports, no commodity speculation. There is no reason to overproduce, no need to do extra to survive. Society is no longer based around exploitation.

However, as much as I like to imagine living in such a beautiful and fair society, and this book goes to great lengths to prove it's not completely insane to think a society like this would work, and gives many examples of specific enterprises that have successfully worked this way in reality, it never really gives satisfying answers to how a region following this ethos would be established or defended either from internal or external threats. Kropotkin inserts "the community, by agreement" in any place that state management would logically take over. Who defines how much is "enough" wheat, or coal, or bread, or clothing? The community, by agreement. Who tackles public works like pipes, roads, and dams? The community, by agreement.

In a perfect world, where people act rationally, hold rational opinions, and can be convinced by superior logic, that would indeed work beautifully. But in 2020 it's obvious that people don't act in their own best interests, they aren't rational, they don't have to listen to reason. They can, and will, use whatever power they have to elevate themselves and ruin that equality by discriminating against any class of people that can't form a majority. Atrocity and injustice, however small scale, is still quite possible in a world where every action is justified by convincing 51% of the people that care enough to have an opinion.

More broadly, Kropotkin has no mechanism for arbitration within or between these communes. No state means no one person has the power to decide or even just break a tie. Free agreement works when both sides benefit from agreement (like the railway standards he references, each side gets a way to access the other's system). What about when two growing communes want to claim the same corner of fertile land? There is no mechanism to deal with that. What about when a commune that is majority one religion decides another commune is full of infidels and should be destroyed? Does every commune need to be able to defend itself? Need to maintain a military? Ambassadors? When taken in aggregate, rather than in isolation, Kropotkin's world starts to feel like a maze of feudal fiefdoms where it's easy to live with your neighbors as long as they are ideologically identical to you but if one of them shows up on your doorstep ready to rape and pillage you better hope your local military enthusiasts have thought up a plan.

These criticisms are also assuming that the society is already created. The real trick would be convincing a revolution to not just replace the current state (as we've seen time and time again through history) but to actively tear down the apparatus of power and completely rebuild society from the bottom up.

Ultimately, that's what makes Kropotkin's vision impossible. It is a wonderful idea and he does a great job extolling its virtues, but without a way to create, much less maintain, that level of equality from a realistic starting point and without the ability to assume peaceful coexistence with the rest of the world, it's still just another utopic fantasy.

That said, this book never set out to be a manual for the revolutionary. Kropotkin doesn't end it calling for the workers to rise up, or make plans for how Europe will be converted like in the Communist Manifesto. This is a philosophical text, an illuminating of some ideas and possible solutions backed with some interesting statistics. Kropotkin succeeds more in his criticism of capitalism and state communism than he does in putting forth a real vision of the future. Yet, when reading it, I couldn't help but think that just as his criticisms were accurate, the idea that a liberated, federated society might work is actually less far-fetched now than it was in 1892 thanks to computer automation and examples like the proliferation of Open Source.

Anyway, if there is a work that has a more concrete path for anarchist communism, I'd like to read it. For now, I'll just sigh and say "Maybe someday, but definitely not tomorrow."