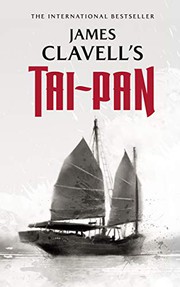 After reading Shōgun, I decided to continue Clavell's Asian Saga chronologically and arrived at Tai-Pan.

This story was written almost 10 years before Shōgun and it reads much more like an adventure genre novel. Both are historical fiction, but the main character of Tai-Pan, Dirk Struan, feels much more like a Mary Sue or an author insert than Blackthorne did in Shōgun.

In part this is due to Struan's anachronistic attitudes as an Englishman in China, some of which I don't think are realistic. I can believe Struan would respect the Chinese, and even adopt some of their customs, but some of his modern hygiene and clothing choices, not to mention deciding to marry his love match Chinese mistress just seem like transporting the values of 1966 back to 1841.

It's also that Struan is so confident and good at everything - he's a master sea captain, cunning trader, manipulator, diplomat, formidable melee fighter. He's universally respected even by rivals. There are a few sequences where Struan is captaining his ship, barking orders, and reflecting on the sea where I had to stop and laugh about how much of a stoic action hero trope he was.

Reading for pleasure, I don't mind Struan's anachronisms or his main character syndrome, but it really made me long for a stronger counterpoint to elevate the story out of adventure genre fiction territory. Struan is almost always the POV character and the other characters are defined in relation to him as The Tai-Pan. His trade rivals (Brock et. al.) exist to destroy him and take his title or dominate his son, Culum, after he becomes Tai-Pan. Others (Orlov, Longstaff, Skinner) exist to serve him or be manipulated by him.

There are many brief subplots and minor characters but they're of little consequence except to add a bit of action (Scragger), intrigue (Zergeyev), tragedy (Mary Sinclair) or comic relief (Quance) to the overall story.

The exceptions are the Chinese characters (May May, Jin-qua, Gordon Chen) that receive a bit of attention and are used to expound on the hidden workings of the Chinese empire and specifically how the Chinese relate to the English traders but even these characters have sparse backstories and only act in relation to Struan himself. In fact, China is more of a backdrop for this English story than a real setting.

Compare this to Shōgun where Blackthorne was a competent navigator in exceptional circumstances, but he wasn't supernaturally good at everything. He was also forced into integrating into Japanese society reluctantly. More importantly, he was our European observer of a fundamentally Japanese story focused on Toranaga. There were many points of view, some quite alien, but you got the sense that the wheels had been turning for years by the time Blackthorne washes up. Not every plot is resolved, but each one seems integral to the various main characters and their motivations.

Regardless of these criticisms though, it was a fun read. I would even argue it had a more satisfying (and conclusive) ending than Shōgun, it's just a little pulpy and plot driven comparatively. Where Shōgun read like a masterpiece of fiction and exploration of Japanese culture, Tai-Pan reads more like a fleshed out 1966 screenplay for a swashbuckling summer popcorn movie. Fun, just in a different way.

I will say I'm very curious to read Clavell's Gai-Jin at some point. It's the next book chronologically and looks to be a direct sequel to Tai-Pan, but it's the last book in the series by publication order. Published in 1993, right before Clavell's death in 1994, I'm curious to see The Noble House in the final evolution of his style in contrast to this relatively early work.