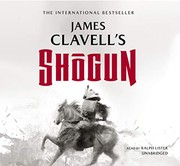 I enjoyed this book, but it comes dangerously close to overstaying its welcome.

I have to give credit to Clavell for putting together such a far-reaching epic story in a stand alone work. He does such a good job giving you well-researched details about feudal Japan and how their society hung together in contrast to feudal Europe, highlighting the many ways in which feudal Japan reads as more modern to the 20th / 21st century standard while also acknowledging their sort of collective, efficient brutality. The plot that emerges is twisty in a delightful way that court intrigue seems uniquely capable of delivering regardless of which culture it takes place in. Clavell does an especially great job making each of the many characters feel unique, with their own agendas, secrets, and desires. Not one of them felt like a caricature, or a mindless antagonist.

The one flaw with Shogun is the pacing. You spend the first half of the story getting a very thorough introduction to feudal Japan, then the plot gets moving and it becomes more character driven, but once you're closing in on the end you realize there's no way Clavell is going to give a fully satisfying ending in the remaining pages. The story ends too quickly from a plot perspective, and it makes some of the 1200 pages of exhaustive details seem needless in retrospect*. Ultimately, I would have traded a couple hundred pages of early world-building and administrative minutiae (as edifying as I found that at the time) for a couple hundred pages on the end to full settle the plot and explore the short term consequences.

Ending a little abruptly keeps this book from being a true masterpiece, but it's still a damn good read, an interesting glimpse into feudal Japan and its complicated politics, and a very entertaining story of adventure, romance, loyalty and betrayal. I'd recommend it for anyone that isn't scared off by the page count.