Yesterday, July 15th 2020, my tortoise Rupert died. He isn't the first pet, or the first tortoise that has died in my care, but he was with us long enough that I feel a special affection for him and as such it doesn't feel right to bury him without having put some thoughts about hm down somewhere that won't be lost in a notebook or a scrap of paper. 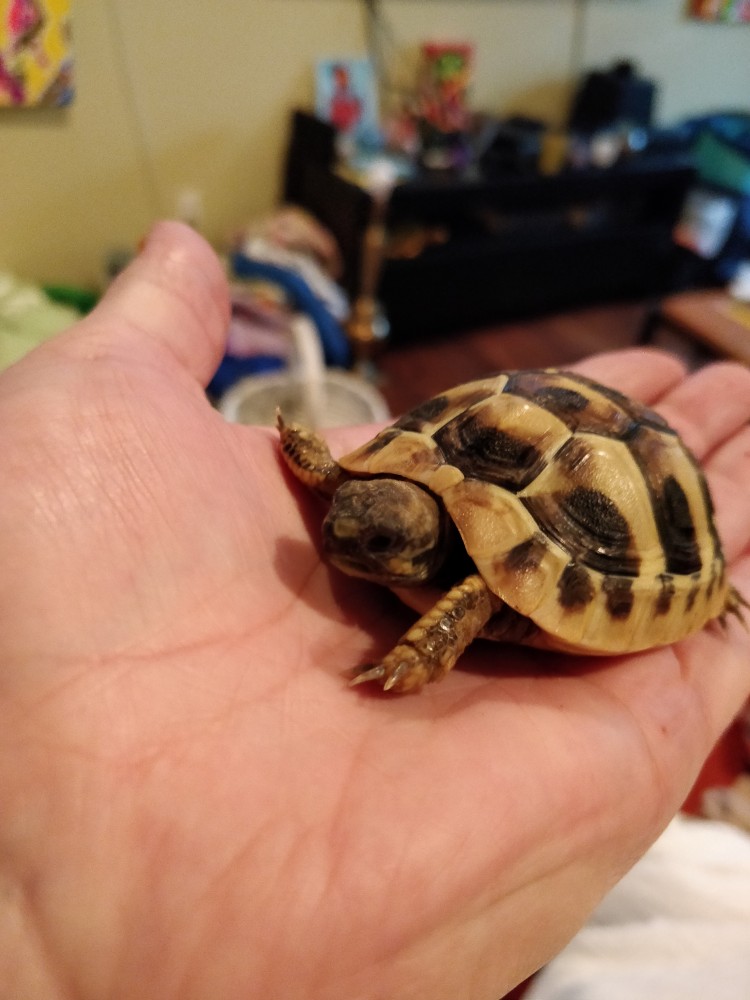 The first thing I have to say is that I miss the little guy. I have pictures and videos of him from better days, but none of them can convey the feeling of running your fingers across his shell. The little dimple he had on his right shoulder since the day we got him. The way the big scales at his wrists felt soft if you rubbed them the right way. The way he would pull his foot in if you playfully pinched it. Or how he would push your hand out of the way if you put it in his path.

There's an entire vocabulary that now feels like live wires of grief. His full name was Rupert Snakefist, because of the smooth yellow arm scales that bordered the black scales down his arms. Rupes. Rupington. Tortugita. Mortoise was our classical corruption of his species.

About a month ago, he was in dire shape. He had a respiratory infection, but he started to pull out of it, he got his appetite back, he started putting on weight again. I was hand feeding him Mazuri and butter lettuce daily. We were treating his dry eyes with liquid tears and occasional medication. Another bit of vocabulary dead - Globbo, Globbington. 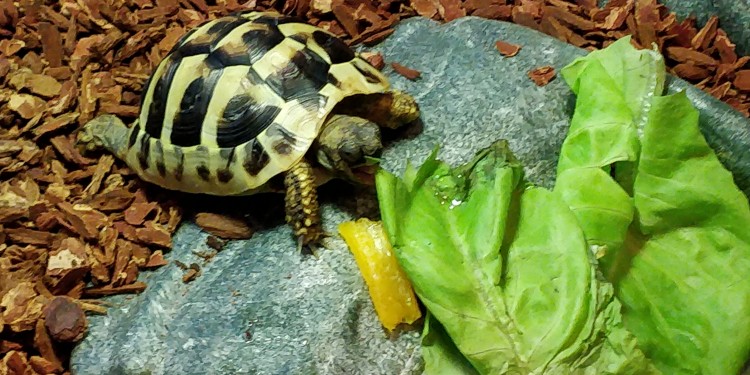 Rupert chowing down in November

Monday he got a Vitamin A shot. Tuesday we tried to convince him to eat some Reptivite with Vitamin A as well, by sprinkling it on some white nectarine which he ate vigorously. He'd eaten small bits of nectarine before, but I guess it was too much. He started to struggle a bit, in a way that was familiar after he gorged himself on special fruit or veg. Wednesday morning he was weak and I rushed him to the vet. By the time he got there, I think he was already dead. The vet found a heartbeat, but he was no longer responding. In less than 24 hours he went from recovering to dead.

There's a certainty with pets when their death is your fault. This is undeniably at our feet. We got Rupert on February 13th 2019 and he was maybe a few months to six months old at the outside. That means he was roughly 2 years old. Still a baby in tortoise time. Still fragile. But whether it was the lingering effects of the infection, or the overdose of white nectarine, or both, it doesn't matter now.

As he was recovering, I spent many a weekend day with him out on the concrete slab in our backyard. He loved the sun. I'd sit and read and he'd explore or soak in the little dish. Maybe work on some of the food I'd brought out. That's how I want to remember him. On the slab, or crawling up my shoulder. When I laid in bed with him on my chest, he'd tuck his head into my beard. 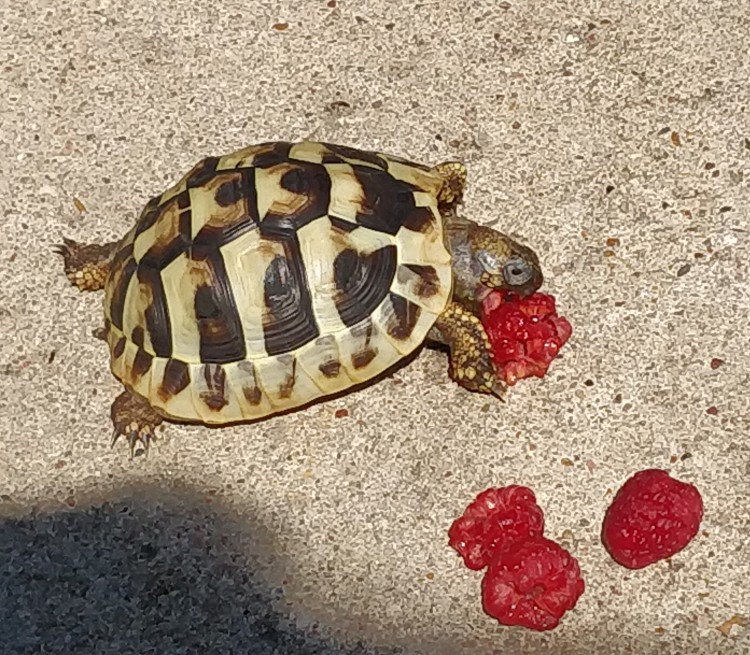 Rupert on the sunny slab back in May

They say that tortoises aren't very affectionate, but I don't believe that. The way he looked at us. The way he crawled to us. He knew us and loved us. Out on that back slab he was theoretically in danger from aerial predators so even when he crawled far, you'd look up and find him looking back at you. We were his safety and I feel like we betrayed him in the end because we didn't take good enough care of him.

All through his treatment though, as he was improving, he was so brave. So goddam brave. He took the shots and the flushes and the poking and the prodding. He didn't have a choice, but he tried hard to make it. He tried so hard. He was brave. He was brave when he was throwing himself over barriers. Brave when he jumped off the couch or the bed. He was fearless sticking his head into the log pile outside before I could run to get him. 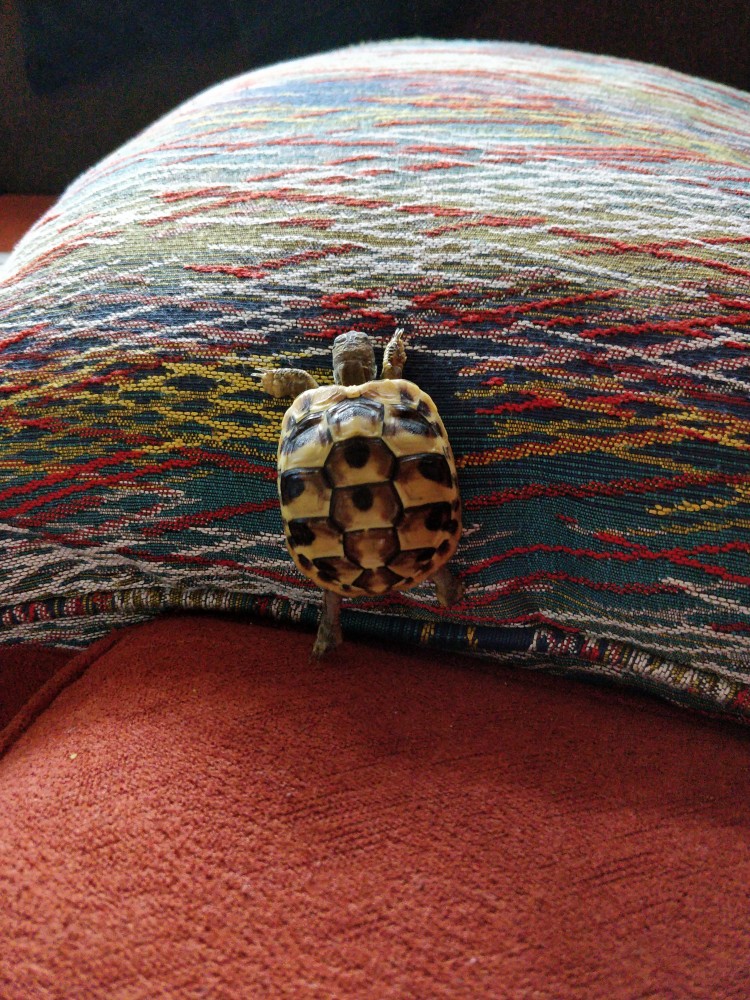 Rupert the day we got him, brave as always