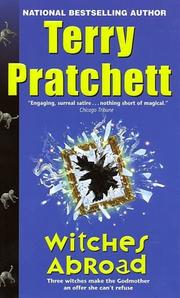 I ended up enjoying this Discworld novel, but I can see why people generally don't rank the Witches series very highly (and I say that as someone who's read Equal Rites / Wyrd Sisters as well).

The first half of this book I was in danger of putting it down (like I did with Moving Pictures) because it seemed like a bunch of disconnected chances for the three witches to comment on real-world cultures from a sort of backward Lancre (rural UK) point of view. There's comedy there, but it's not so compelling.

I'm glad I stuck it out for the second half, however, because once the witches finish traveling and start to pursue the main plot it becomes a lot more interesting and coherent. Exploring the nature of stories and their unrealistic expectations, and even adding some interesting depth to the magic of Discworld. The end, in particular, really did a great job of tying the whole story together.

Definitely worth a read for Discworld fans, despite a bit of a slow start.