On The High Window 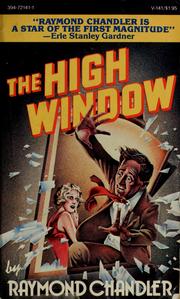 This novel is a bit bipolar reading it almost 80 years after it was written.

There are flashes of great hard-boiled prose in the work and the dialogue occasionally made me smile with how colorfully stilted it is (in a good, film noir way). In these stretches it's easy to see why Chandler was as influential on pop culture as he was.

I got thrown off more than a few times by just how detailed the main character, Marlowe, gets in describing locations and people - particularly women. I was baffled by some of the choices made to describe almost tangential things in great detail. Being written from the first person as the detective explains some of this terse but exhaustive note taking style, but I found myself skimming for some of the better turns of phrase.

There was also surprisingly little action in this novel. Marlowe discovers a lot by questioning, people come to him and point him at others, he finds dead bodies, etc. but he never really feels like he's in danger despite the presence of the usual heavies. There's a token fistfight that doesn't feel very realistically motivated, and all of the crime happens without Marlowe present. There's no sexual element either, no chemistry with any of the women. The result is Marlowe feels relatively passive, mostly just an agent to pursue leads, like a detached Agatha Christie protagonist, right up until he puts it all together.

In that way, I think the intervening 80 years of film noir has really sapped a lot from my enjoyment of this book. I was expecting gunplay and a sizzling femme fatale with creatively oblique dialogue but this novel is more akin to a morally ambiguous Poirot.

However, I have to give it some credit as the pulp fiction of its day. Like those Christie novels, this was intended to be short and to the point, to entertain for a while, and maybe not to provoke the sort of academic dissection more literary fiction might attempt. From that point of view I can appreciate this work like a 1942 version of a TV procedural... but I still feel like I got an episode of Dragnet when I was looking for Double Indemnity.