On Round Rock Express

A week ago I went to my first AAA ballgame between the Round Rock Express and the Memphis Redbirds. Round Rock is a wealthy suburb of Austin, so the park is only 20-30 minutes away and with my recent baseball obsession I decided to check them out.

The Round Rock Express' home field is the Dell Diamond, which is a relatively recent facility built in 2000 with ample help from the city of Round Rock. Now, I've never been in a AAA park, but I've visited the old (90s style) Busch Stadium back in St. Louis so I feel like I have a basis for comparison between the leagues at least.

I have to say, the stadium is very nice. It was clean. It was small. Plenty of parking. Looks like there were a lot of very nice skyboxes up top. I was floored by how close I was able to get to the action for a paltry $7 (half-price) admission. Considering in a major league park the nosebleeds easily run $25 a pop, that's a bargain. Here's where I sat: 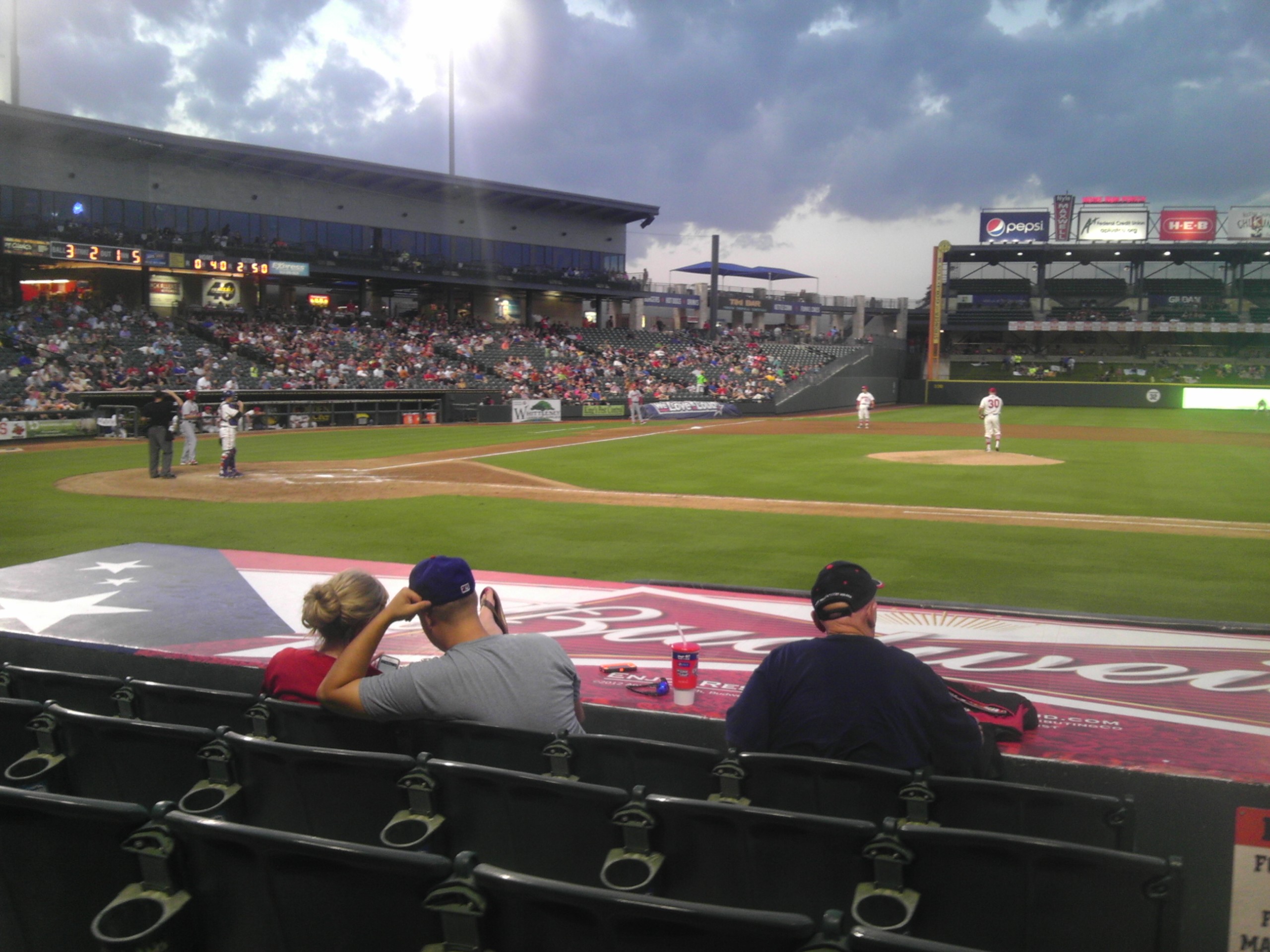 Pretty sweet for $7. I got to see a few Cardinals prospects (playing for the farm team Redbirds) right up close and personal. Kolten Wong, Oscar Taveras, and Michael Wacha were all within spitting distance. The Redbirds didn't play so well, but who can blame them? AAA is full of MLB hopefuls and washouts. The composition of their teams is constantly shifting, and they don't get the same sort of support or consistency they would receive in the MLB. A single star, or even three future stars, don't make a great team by themselves.

Anyway, I was very surprised when I got there because there really weren't any bad seats in the house. In an MLB stadium that seats almost 50000, that isn't and can't possibly be true. At the Dell Diamond, which has a maximum capacity of 8700, even the outfield seats are pretty good. I was happy that I brought my glove because taking a foul ball to the face was one of my chief fears sitting through the game. They were dropping around me on all sides. It was a far cry from the second deck level seats I remember from old Busch.

There are also a number of other amenities I found interesting, including the kid's play area. Apparently there's a pool as well. Unfortunately, I didn't have my daughter with me (I bought three tickets, but my wife and daughter were both called back to St. Louis for a family emergency) so I can't comment on their quality, but I did see them in outfield. If your kid is the impatient type, or just bored of mediocre baseball, then I'm sure it's a godsend.

Unfortunately there is one place that the Dell Diamond and Busch are identical: the concessions are where they really make their money. I brought some cash, and I foolishly planned to eat there but when slices are $5 and beers are $7 (or $9 if you don't want swill) I made a meal in the first inning and didn't go back. I brought my own water bottle and contented myself with that afterwards. I know that I paid half price and parking was $5, but even so the night's entertainment ended up costing a little over $30. Not too terrible, but do yourself a favor and have a nice meal out before hand. You don't have to stand in line, sit in a plastic seat, watch your beer and for $19 a person you could do way better. As some Yelp users pointed out, the ballpark shares a parking lot with a Salt Lick satellite location so if you're a fan of BBQ you don't even need to get in your car.

The staff of the Dell Diamond also seemed to be rather surly. The ticket guy got annoyed when he couldn't find my tickets and I had to bring out my phone to lookup the reservation number. Look man, it's not my problem your shitty software can't figure out my name. People don't always sign up for things with their proper ID full name (I go by Jack, my ID says John and there are ten thousand variations of the same problem Pat/Patrick/Patricia Liz/Beth/Elizabeth they're all the same effing name). Since the Minor League ticketing is all handled by the same firm, they should make it clearer that your profile name needs to be what's on your ID or the staff should stop being so rigid. Look me up by last name and figure it out. I have a common last name but there are maybe 2-3000 people with tickets. How many Millers can there be? Anyway, on the way in with my backpack (containing my glove, a water bottle, my sunglasses etc.) the guy seemed pissed off when it took me a second to realize that his gruff pig voice had said "Open it." Contrary to what the online reviews said, the only time these folks were friendly to me was when I was on my way out the door.

The fans were assholes as well, but I guess that's what I get for rooting against the home team. Still, some of the shit that came out of the drunken pricks behind home base in the last third of the game were just totally inappropriate. There was some good natured razzing, of course (like "maybe you're actually a lefty!" to a right handed batter) but there were also some blue streaks in the language and I was glad I hadn't brought any little ears. Less because of the cursing and more because they were just so goddam negative. Dude, you're at a AAA game, these guys don't need you to remind them they don't measure up and they sure don't need to hear you talk shit on their mothers. I'd like to see some of the drunken white trash get out of the stands and play some baseball - if they could do better there'd probably be a contract in it for them.

To sum up my visit: The stadium was clean, the tickets were cheap, the food was expensive, the staff was hit and miss, and the home fans were dicks. Most importantly the baseball just wasn't that good. I won't say that I'll never go again, but if I do I'll eat beforehand and I won't feel like I should stick around for the whole game because, frankly, it's not MLB and it shows painfully. The caliber of play just isn't there.

Here are a few things that I couldn't find on the internet and wish I could.