On Masters of Doom: How Two Guys Created an Empire and Transformed Pop Culture 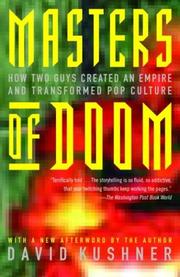 I enjoyed reading this. I was about 6 when Doom came out, but in the subsequent years I played the shareware versions of it as well as Commander Keen and Wolfenstein 3D regularly. The first half of this book was a bit of a nostalgia trip but it filled in a lot of the backstory of Carmack (who is a personal hero of mine as a C programmer) and Romero (who was more of a famous name).

I was most interested in the early, hacker days of basically turning pizza and Diet Coke into seminal videogames. The book did a good job chronicling the creation of Commander Keen and Wolf3D as a prelude to Doom and setting the scene of BBS era shareware gaming. It also colored in some of the other notables whose roles were never as clear to me. The contributions of fellow Softdisk guys/id founders Tom Hall, Adrian Carmack, and to a lesser extent designers like American McGee and Sandy Petersen are all made clear. There's a lot of fun in reading about just what a huge splash Doom made and getting some light shed on other players like Scott Miller's Apogee, or Bill Gates trying hard to sell Windows 95 as an upgrade over DOS, Burger Bill, Nintendo trying to keep the SNES a family system, or even Joe Lieberman calling for the creation of the ESRB.

As a programmer I was generally pleased with how technical the book got in some places. Nothing too insane for the non-technical reader, but it did go into details about how each iteration of Carmack's engine was different and better than the last. The rise of the GPU is also a minor tangent here. It didn't get everything right (at one point it referred to OpenGL as a programming language which... is a simplification at best) but it grounds the software work well and even gives some details about the rigs they were using to do their work.

I was less interested in the second half, mostly because I was actually old enough to remember some of the broad strokes but there are still plenty of bits of trivia and readings from .plan files that were new to me. The book does a pretty great job overall of painting Carmack and Romero as the yin and yang of early id, and the later history of Ion Storm (Romero's game developer utopia that failed to do much - classic status of Deus Ex aside) versus id's more diminished role of being an engine publisher (which is harsh but mostly true up until Doom 2016 well after this book) underscores that they both really needed each other to bring balance to their early work. Even with 16 more years of retrospect that analysis holds up.

Anyway, very interesting book and I'd highly recommend it to anyone that enjoyed the 90s PC gaming scene, even if you were just a kid.