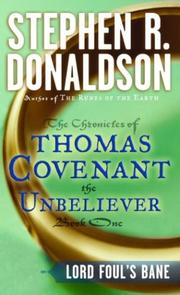 I hated this book and, for the record, I didn't finish it.

I get that Covenant is not likable on purpose. The whole idea that attracted me to this book is that Covenant doesn't "opt in" when the call to adventure is thrust upon him and for about 50 pages it was nice to have a protagonist that was such a miserable prick.

But then . At that point I took a long hard look at the book, read another 100 pages or so to see what consequences fell out, and then decided to cut my losses.

I can appreciate that Donaldson was trying to push the boundaries of fantasy by defying a ton of hero tropes, but - at least for me - he didn't have the skill to actually make a good story out of it. Covenant is inexplicably transported to The Land, a name which reflects the utterly boilerplate nature of this fantasy world, and is helped by a bunch of people that read like cardboard cutouts to defeat Lord Foul, another name which might as well be Lord Badguy Placeholder.

The prose is just as devoid of interest as the setting and characters. Donaldson's style is dusty and most of the time not very evocative. When the characters of the Land speak it's in this stilted fantasy accent that made my brain flatline. If Covenant wasn't such an ass this book would have just been unimaginative and boring instead of torturously frustrating.

I gave this book 200 pages to pique my interest and after that long there was just nothing that could provoke me to turn another page except picking up a totally different book.