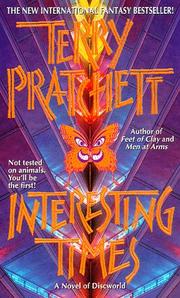 Within Discworld, this pretty much checks all boxes.

This deep into the long series (17 novels) it's not really possible to review independently, and it wouldn't stand alone as well, but it was really nice to return to Pratchett's Discworld and particularly returning to Rincewind, Cohen, and Twoflower - the main characters of the first two Discworld novels, The Colour of Magic and The Light Fantastic.

In some ways Interesting Times is predictable and in other books I'd consider that instantly lethal to any sort of interest, but like most of the Discworld books the interest isn't so much in the plot as it is being led by Pratchett through the intricacies of this world and his use of metaphor to talk about human nature. In this case, the main characters head to an oppressive regime modeled on China and has a lot to say about that oppression, but also the nature and contradictions of civilization in general and it's all done in the sort of tongue-in-cheek, circumspect way that Pratchett is so good at. I didn't need to feel like Rincewind, Cohen, or Twoflower were somehow in danger, or question whether Lord Hong would get his due, to be thoroughly entertained.

Would it stand up literarily to some of the other work I've give four stars? Maybe not, but I spent half of this book with a grin on my face, so as far as I'm concerned it's mission accomplished.