On East of Eden 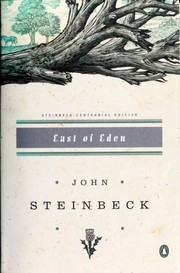 I really enjoyed this book, even if it's a bit reminiscent of the familial epics I've been growing a bit tired of.

A 3.5 might be a bit more honest, because even though Steinbeck's writing is a pleasure, I think this story was bit indulgent. A lot of words were spent on very early history that was only mildly relevant, tangents out of Steinbeck's life (the novel is semi-autobiographical), and even though he is quite affectionate in his description of Salinas it's occasionally a bit much.

That said, for a novel that's pretty clearly a re-telling of the beginning of Genesis (I mean, look at the title) it had a lot of really great scenes, action, drama, and even a few chapters that were just plain funny. Even though it hits some of the bullet points from the Bible it wasn't predictable and the overall message - which was beautifully underscored by the ending - was quite different than the usual take away from the story of Cain and Abel.

Lots of really good side characters as well. Samuel Hamilton and Lee particularly being a couple of guys I'd like to sit down and have a drink of ng-ka-py with.