On A Fire Upon The Deep 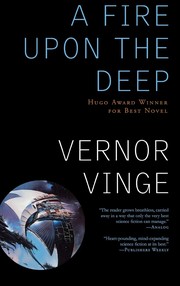 It's rare that I'd give a perfect score to a space opera, but this novel is so inventive and well told that I had to give it the nod.

Vinge accomplished something with A Fire Upon The Deep that I feel like I've been searching for ever since I read the Iain M. Banks' first Culture novel (Consider Phlebas) - a galaxy that is lively, filled with truly alien aliens, obscenely high technology, and many disparate factions - but in a lot of ways Vinge succeeds where Banks' later Culture books fail.

In Vinge's universe, humanity is not only a small part of a huge tapestry of civilizations of all descriptions, it's also a fragile and vulnerable race. The loss of a single world, or a single ship actually hurts and the main characters of the novel are usually some of the only humans nearby. This is a refreshing change of pace from Banks' work where humanity is ensconced in the nearly all powerful and galaxy dominating Culture that is so far beyond the usual needs and wants of us lowly 21st century Earth humans that in Look to Windward.

Vinge does a better job of conveying what is happening on a galactic level too. He takes a page out of the early internet's decentralization so his civilizations, businesses, and individuals all communicate on a BBS-style low bandwidth galactic Net. The reader follows along with characters receiving the news and the messages paint a good picture of what's happening and how the rest of the galaxy is reacting to events without needing extraneous scenes or characters. Transmission also requires line of sight and long distance requires many hops which, compared to the instantaneous and disembodied chatter of Banks' hyper-intelligent AI Minds, is wonderfully grounded. The mechanic is never overused either (which was one of my big complaints about Banks' Excession where pages were devoted to what amount to first person ship logs).

Even space itself has more character in A Fire Upon The Deep. Space is not one big homogenous grid we're hanging in. It has "zones" that characterize how fast energy and information can be transmitted. Closer to the galactic core, high tech things like AI automation, FTL, and data transmission begin to degrade - not because of a plot convenient accident ("oh no, the AI went haywire!") but naturally and predictably such that characters are aware of it and plan for it. I love this idea and it made me think differently about something most space fiction takes for granted - the void of space itself. The concept is so well applied it informs every aspect of the story (thus the name of the series Zones of Thought). Primitive core worlds are trapped but also protected by the reluctance of the more advanced, high worlds to even enter their space and those advanced worlds are in turn protected from the civilizations that have effectively transcended in a similar way.

Vinge's conception of alien races is also deeply satisfying. Alien cultures, particularly the ones A Fire Upon The Deep focuses on are weird. And not just in a "I have a bumpy forehead and an odd number of legs" or a "My cultural values are different" weird, but a "you can't even comprehend what my life is like" weird. Best of all, Vinge does a great job of making these alien cultures feel real and true to what makes them unique instead of just being humanity with a few extra appendages.

Lastly, I have to acknowledge how Vinge wrote this book as a completely self-contained story. The end of the book is conclusive and satisfying in a way that some fiction is lacking these days. There are follow up books, including a direct sequel that came out 20 years later, but at no point does it feel like plot hook are being laid to support the next entry. I appreciate the brevity in comparison to series like The Expanse or Mistborn whose entries were fun but still obviously written to be parts of a larger, overall work.

These points elevate A Fire Upon The Deep well above the average space opera and I wish I'd read it earlier.