From the last post you'd probably guess that I'd been playing through videogames and have completely exited the world of software, but it's not true. I've been hard at work, on (unfortunately) real work. The day job. I can't lie that it's pretty satisfying, but it does absorb my time. Especially when I get owned for having bad test methodology and miss a deadline. Whoops.

Anyway, I'm not here to talk about anything so mundane as work. I'm here to say that I made a mistake. Eight or nine months ago, I built my dream desktop. I went all out. Dual 24"s, kickass processor, top of the line graphics, a decent amount of RAM. However, in my salivation sessions on Newegg, I totally forgot two key elements... the human interface. Mouse and keyboard. So, despite spending a small fortune on hardware, I ended up running to Fry's and grabbing a shitty $10 keyboard and a Microsoft mouse. The mouse ended up being fine (at least for as much as I use a mouse - not much), and I can credit Microsoft with making decent hardware. The keyboard, on the other hand, was a total piece of shit. I guess I shouldn't expect any different for that price, but in its defense, I did manage to get this far with it and my previous self didn't really think twice about something as trivial as a keyboard. Hell, I damn near went to Goodwill and picked up a used one for 99 cents.

Big mistake. Not only are the keys on the $10 monstrosity annoyingly flimsy and flat, but also it has the ACPI control buttons directly over the arrow keys. Possibly the worst design ever. Using arrows to scroll a webpage or something, make a bit of a mistake hitting the 'up' key and suddenly your computer is shutting down. What the fuck. Of course, I was able to disable that functionality in Linux (and honestly, I was sort of surprised it worked out of the box in the first place), but nonetheless. Scarlett's now using it as a toy, I didn't even hoard the thing like I usually do with keyboards.

I was complaining about it once and my friend Scott turned me on to the world of elite keyboards. I admit, I was skeptical. The shitty keyboard was bad, but I also didn't really want to spend a hundred bucks on a keyboard, and I honestly don't care about wireless bullshit or LED screens (although OLED keys would be cool, those boards also cost more than my whole desktop). Mechanical keys meant something to me though, I've had a number of Model Ms all in various states of repair over my college career, but they're loud and bulky and the only functional one I have has to be connected with serial -> PS2 -> USB which is just ridiculous. Anyway, talking with Scott and reading about Cherry mechanical keys and all of this stuff, he finally pointed me to Das Keyboard, a spiritual successor to the Model M, with mechanical keys and a no-BS approach. No wireless. No LED screen (although it has lights for the typical stuff, like Caps Lock) just a solid, no-frills keyboard, with comfortable keys. It's even made by a local Austin company too, which is pretty sweet.

It was still hard to pull the trigger though, the $10 thing was serving its purpose, it wasn't really getting in the way now that I had learned to avoid those damn ACPI keys. I did tell my wife about it though and despite the fact that I don't think I'd ever spend three figures on a keyboard for myself, today I answered the door and the UPS who handed me a number of packages. One of which was a keyboard shaped box from Metadot. It arrived two days early (probably because their shipping department is basically down the street). Now here I sit, typing on a Model S Professional Silent keyboard. This thing rocks. I can't even really identify what it is about it, I mean consciously I know it's the mechanical keys, but the whole thing just feels... right. It feels solid. I feel like I'll be typing on this bad boy 30 years from now. Juliette even got the Tux keys to replace the Windows keys, very thoughtful and definitely puts the final touches on it.

It was a Father's Day gift that arrived early and I happened to notice, but I'll be damned if I'm going to do the rest of my week of work on the old keyboard when I know that this masterpiece is in the house =). Here's a shot of it on my desk, taken with my crappy phone camera and then conveniently uploaded through its built-in USB 2.0 hub. 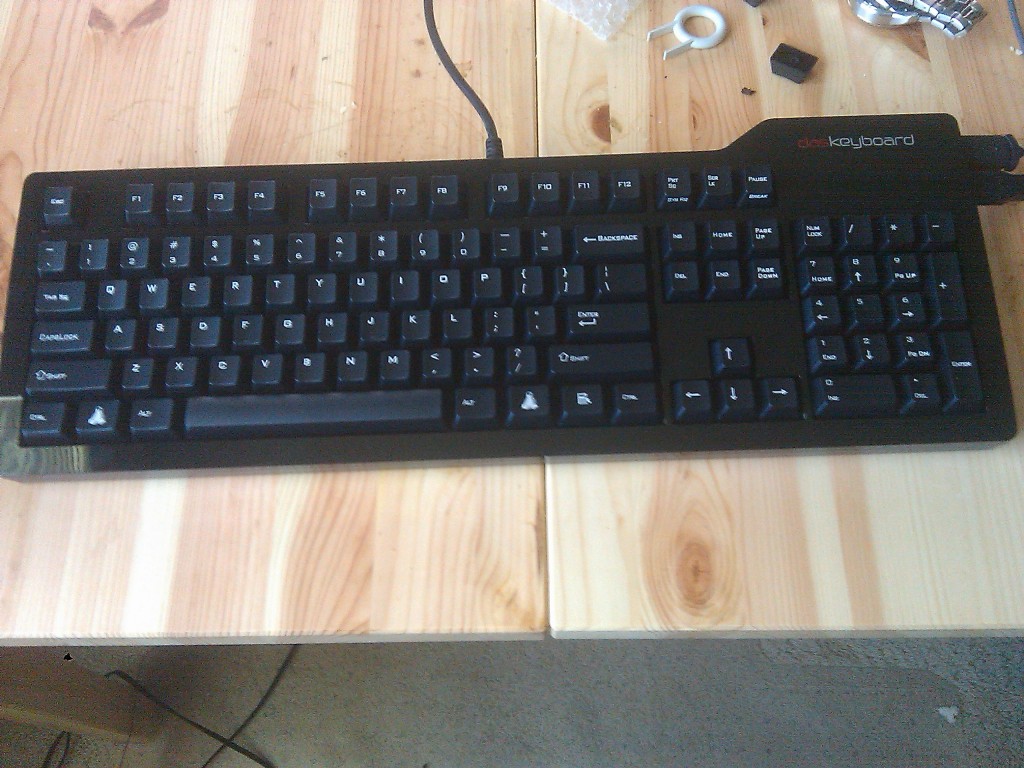